Considering that voting is open through July 31, 2021 for the 2020 Charles S. Roberts Awards and that I’m buzzing from an awesome weekend during which I finally got the opportunity to play Triumph & Tragedy, Time of Crisis, and Europe Divided, wargames have been on my mind non-stop lately, so I feel compelled to share some exciting and interesting 2021 releases to check out ahead of next year’s CSR Awards:

• Bayonets & Tomahawks is a new, unique, two-player card-driven wargame (without the usual hand-management element) from designer and artist Marc Rodrigue and publisher GMT Games. While it’s primarily a two-player game, it can also be played solo or with teams with up to four players.

Here’s an overview from the publisher as to what you can expect for gameplay:

Bayonets & Tomahawks is a two-player strategic game focusing on the French and Indian War that took place from 1755-1760. Its fluid yet rich system ensures fun for players of all levels. One player controls the British, and the other controls the French and most Indians. Indian diplomacy, raids, constructions, naval operations, sieges: nothing is left out in order to immerse players in the fascinating military asymmetries of the 18th-Century colonial frontier.

A game of B&T can last one or more game years depending on the scenario chosen — up to the full conflict. Over eight action rounds in each game year, players move their pieces on land and sea, perform raids, build forts and roads, etc. Battles/sieges usually occur at the end of each action round. A game year also includes three logistics rounds: “Fleets arrive”, “Colonials enlist”, and “Winter quarters”.

B&T is card driven, but unlike in most card-assisted wargames player don’t manage a hand of cards. Each player starts the year with one undisclosed reserve action card picked randomly. At the beginning of each action round, both players draw a new card. They must then choose one of their two cards to play for the current round. The other card becomes their reserve for the next round. At each action round, the French player also gets a random Indians action card.

The action points (AP) on the cards in play determine how many stacks of pieces a player can activate during the current round. In addition the cards trigger events and determine initiative for the next action round. Movement is point to point. Pieces can also move via sea zones.

Each side has particular assets they must make the most of in order to achieve victory: the British have overwhelming numbers, the French are more adept at wilderness fighting with the help of their numerous Indian allies. To win, a player must control enough enemy key spaces to reach the scenario’s “invasion victory points” requirement by game end. In one-year scenarios, pieces removed permanently from play yield invasion VP as well. The French player can also win if they succeed in enough raids during the current year to reach the scenario’s “raid victory points” requirement.

By its nature, the game lends itself to solitaire play. Additionally, the rules allow the actions of each camp to be split, which means that up to two British players (British, Colonial) and three French players (French, Canadian, Indian) can relive the historic pains of shared command.

• Even though Nevsky: Teutons and Rus in Collision 1240-1242, the first volume in Volko Ruhnke and GMT Games’ Levy & Campaign Series, sits unplayed on my “shelf of opportunity”, I can’t help but be excited and curious about the upcoming second volume in the series, Almoravid: Reconquista and Riposte in Spain, 1085-1086, designed by COIN Series creator Volko Ruhnke.

Following similar rules to Nevksy, in Almoravid Ruhnke challenges 1-2 players to manage logistics for their armies in 11th-century Spain as described below by the publisher:

Almoravid] is a board wargame about a pair of tumultuous campaigns in the Spanish Reconquista: Leonese King Alfonso VI’s advances against the 11th century’s fractious Muslim Taifa states, and the resulting intervention by a fundamentalist African Muslim army seeking to roll the Christians back. It is the second volume in GMT Games’ Levy & Campaign Series portraying medieval military operations.

Players will raise and equip their armies and send them out to ravage or conquer disputed territory and defeat enemy forces. Service obligations and alliances will provide a panoply of lords and vassals to serve on campaign but only for limited periods. Players must keep an eye on the calendar and reward lords to keep them in the field. 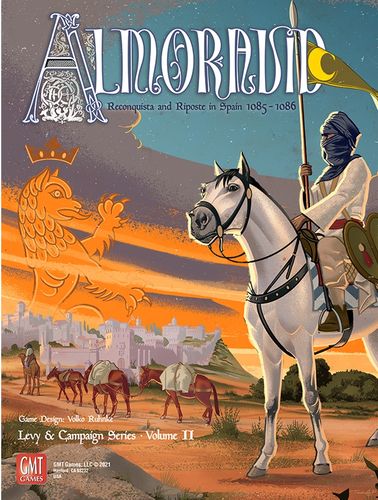 Every forty days, the sides will levy various lords and vassals and their forces, transport, and capabilities, backed by higher political authorities. Each lord is rated for fealty, lordship, service, and lays out his forces and assets on a mat. Wooden pieces represent units of knights, mounted sergeants, horse and foot units from North Africa, men-at-arms, light horse, militia, and serfs. Assets include counters for transport such as carts and mule trains; provender to feed the army; and coin to pay for longer service or loot captured by ravaging or conquering enemy regions.

The players then plan and command a campaign for that forty days with the lords who have mustered. To represent the limits of communications on medieval operations, stacks of command cards commit players to activating lords in a sequence that may or may not meet the needs of the developing situation. Cylinder pieces on the map show the lords’ maneuvers, while markers on a feudal calendar show how much longer the lords will serve, influenced by success or failure in their campaigns. When lords clash in field battle or storming a castle, players array their lords’ mats left, right, center, and reserve and attempt to rout the enemy. Various event and capability cards reveal cultural and technological particulars that influence levy, campaign, and combat.

Almoravid is solitaire friendly, or players can use optional screens to hide what the two players’ lords levy.

NATO, The Cold War Goes Hot plays with 1-4 players in 180-480 minutes and equally excites me and intimidates me based on what I’ve seen and read about it. It’s great that it has different scenarios, especially the introductory scenario, so newbies like me can ease into trying it.

Here’s an overview that details what this new edition has to offer:

NATO, The Cold War Goes Hot marks the return of a true wargaming classic by Bruce Maxwell. NATO simulates a potential NATO/Warsaw Pact conflict in Central Europe during the Cold War years of the 1980s. First published in 1983, this game was Victory Games’ best-selling title, purchased by over 75,000 gamers worldwide.

This new edition is based on an exhaustive two-year study by the designer of the records that have come to light since the fall of the Berlin Wall. The game combines highly accurate information on the forces the Warsaw Pact actually had with now de-classified reports from the CIA and the Defense Intelligence Agency regarding what satellite surveillance and HUMINT revealed about their actual plans. The map has also been extensively updated with new satellite geography. Finally, the game system has been reworked to better reflect the fluid, fast-paced, and deadly nature of modern warfare, while retaining the original intention of simple and intuitive play. Here is the ultimate Cold War game, remastered, and playable in a single sitting.

NATO is a division/brigade level simulation of a Warsaw Pact invasion of Western Europe. The game map depicts the area from Denmark to the Swiss Alps, and from France to Poland. The time frame covers the first fourteen days of war, after which one side or the other has usually run out of an army. The game offers four different scenarios, covering 1) a surprise attack from a standing start, 2) an attempt by the WP to quietly prepare without tipping NATO off beforehand, 3) an extended build-up of forces by both sides before war breaks out, and 4) an introductory scenario covering the invasion of Denmark. 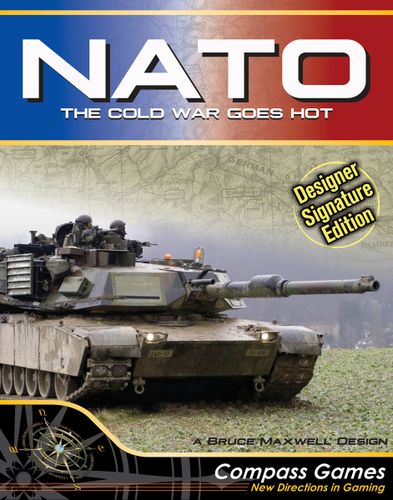 The game features infantry, armor, airborne and airmobile troops, and marines, with easy mechanisms to leverage combined arms operations. It also has extensive options for employing air power, chemical weapons and, for the truly desperate player, a last resort to nuclear weapons. The combat system is built around the concept that the best defense is a good offense, and features artillery, tactical and operational air strikes, reserves, counterattacks and deep exploitation, allowing for a rich set of tactical nuances in play. This is not a game in which the WP attacks and NATO defends. Both players have to attack relentlessly if they want to defeat their opponent.

• Super-sized components feature 9/16″ counters and two game maps with larger hexes
• Game map information has been updated and includes all-new map artwork
• New units have been added, unit information has been updated and all units produced with new artwork
• Existing scenarios have been updated and two new scenarios added
• Orders of Battle are provided for all scenarios both 1983 and 1988, allowing players to see the impact of the Reagan Era rearmament programs
• The game system has been redesigned and the new rules include extensive illustrations, examples of play and designer’s notes to aid clarity
• Each rules section now begins with a summary, allowing experienced players to skip many rules sections that embody classic game mechanisms they already know
• Rules details and restriction have been summarized graphically in player aids for faster reference and easier play
• Enhanced ergonomics are provided for scenario set up and reinforcement charts
• A new set of designer’s notes contain a wealth of historical information on what the West discovered after the Warsaw Pact collapsed and most of its members joined NATO.

• Hidden Strike: American Revolution is a new, card-driven, area-control game based on the American War of Independence from designers Maurice Suckling and Dorian Richard and publisher Worthington Publishing.

The game plays in a variety of different modes with 1-5 players in 60-120 minutes as described below by the publisher:

Hidden Strike: American Revolution recreates the struggle between the American colonists and the British forces during the War of Independence. Each side tries to win the war by controlling a majority of regions.

Confronted by overwhelming forces, the colonists will need strategy to defeat the larger British army and navy to gain their independence. This is a card-driven game in which players manage their hand of cards, usually playing just one card a turn to allow them to move tokens representing military forces across the board into key spaces at key times. 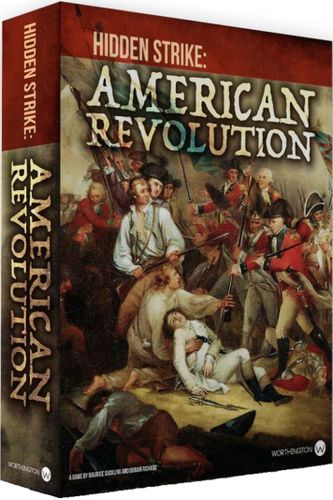 The game can be played in five different modes:
—• Solitaire: For those brave enough to take on the British forces on their own this mode offers a regular and a hardcore option. This mode is a good starting point if you’re trying to learn the game by yourself.
—• Versus: A fierce head-to-head in which one player pitches the British forces against the other player’s American troops.
—• Co-op mode: In this co-operative mode all players share the same objective — take on the role of the American colonists to win Independence from the British.
—• Traitor Mode: The inclusion of a secret traitor who will try to thwart the Americans’ efforts adds a devious twist to the co-op mode.
—• Mastermind: As one player assumes the role of George III, the Sons of Liberty will have to band together to overcome the British King’s formidable forces.